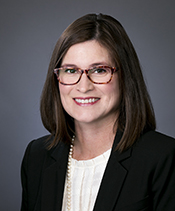 Laurie Dahl Rea, partner for the Firm, has more than two decades of experience in bankruptcy law representing debtors, creditors, Committees, trustees, and litigants. She also served as law clerk to the Honorable Russell F. Nelms and the late Honorable Harold C. Abramson , both former bankruptcy judges in the Northern District of Texas.

State Bar of Texas and admitted to practice in the Northern, Western, Eastern and Southern Districts of Texas and the Fifth Circuit Court of Appeals.

Other Activities and Honors